Yesterday I went on and on about how much I love the Corkulous app, and I promised to talk today about how I use it for my novel-writing. Again, I would like to stress that owning this app (that works on iPad or IPhone only, and the pro edition costs 99 cents a month or $7.99 for the year, at least as I write this blog) is not essential—you can use pen and paper or real cork boards and post-it notes to do what I’m doing just as well, and possibly better. But if you like indulging in cool apps, Corkulous is fun.

I’ve taken a screen shot of the blank version of the character cork board similar to the one I am creating for my novel, which has one protagonist, one love interest, two best friends, and two half antagonists/half allies, and all of them deserve extra development on my part so I can bring them to life in the novel. 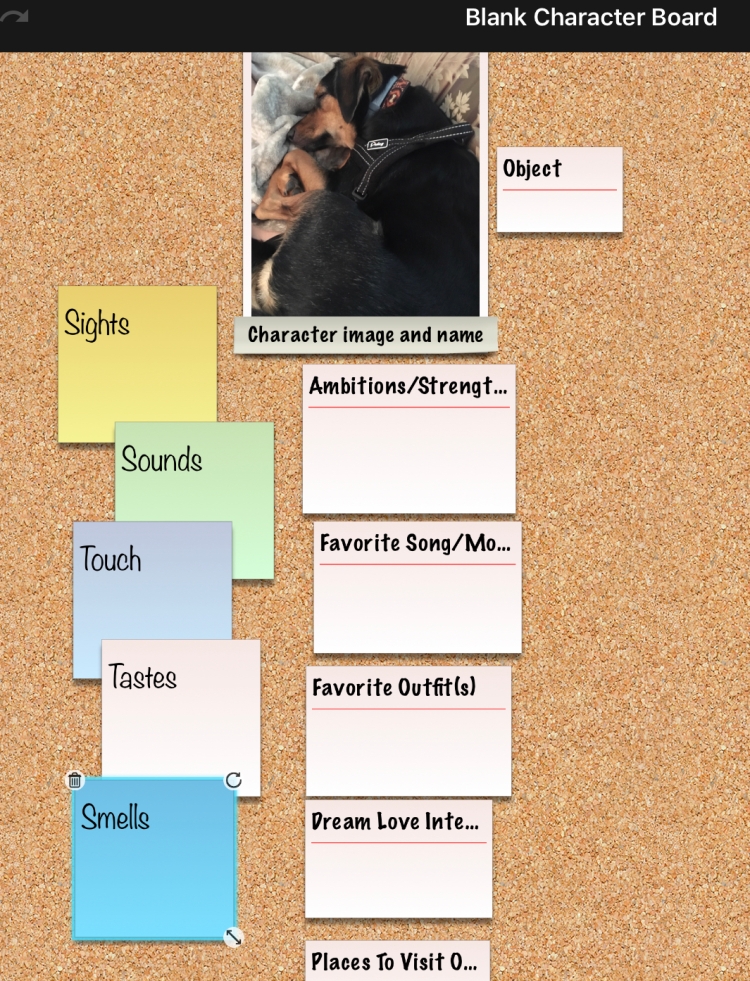 You can see that I can add a photo, usually a screen shot of a stock photo or minor celebrity who looks the part of my imagined character (in this example, I just used a photo of my puppy dog Cisco). Then I can brainstorm different elements that might boost my descriptions of the characters as well as my understanding of how each one constructs their sense of identity. I find it helpful to associate senses with the character. For my puppy dog, let’s see, that might be the sight of the leash (always gets his attention), the sound of my husband’s whistle, which he can’t resist (he ignores my attempts to whistle for him, the stinker) (I mean the dog, not my husband, fyi), the smell of salmon and eggs, etc.

As for the other categories, the object prompt is one I did for a writing workshop where we wrote about an object that was somehow significant to a character or the story, and it was a powerful exercise, so that’s been helpful to me. It helps me build character and story at the same time.

As for the various favorites, I am working on a SF novel set at least a hundred years in the future (which I agree is very optimistic of me), but I actually assign to each character favorite songs, movies, and books from my lifetime—I won’t necessarily name any of them since one imagines that people will have moved on by then… though I’ve noticed that some of the shows I associate with the past are booming right now (Seinfeld, Friends, etc.). I just use those categories to help me think about what this character would connect with, to get a feel for types.

I have the advantage, being overly indulgent in owning various tech toys, that I can use a keyboard with my iPad, so I can type a bit more on the board than I would if I were entering it directly on an iPad or iPhone screen, but if you don’t have a keyboard, I would recommend just jotting a word or two at most, because this board is really meant as a pre-writing tool to trigger lengthier writing on the novel in whatever medium you use (notebook, word processor, etc).

I will also note that I keep changing how I create character notes for my fiction. I’ve used several templates that I’ve found from different sources, some more helpful than others. Sometimes less is better for these notes, serving as prompts for writing in the novel drafts but rather than generating a lot of writing for hours that I then completely forget when I’m actually writing parts of the novel (or that may just be me?).

Okay, enough about Corkulous and character charts. I will say that knowing I planned to write about this topic for the blog prompted me to move forward on this work on my novel, which was awesome, and now I’m filled with ambitions to use my blog as a tool or a kind of accountability partner to accomplish various tasks on my to-do list (I have, for example, multiple articles backlogged to read and reflect on for various reasons). So that makes me happy.

Hope your week is off to a good start. If you have the chance, let me know if you have any tools or strategies for character planning or cork board systems that you like.

Reader. Writer. I love to read and write. A bit of a time management nerd. camaduke.com. View more posts